In the mid-19th century, the first power plants supplied the population with electrical energy. Over the years, power plants have become larger and more powerful. Nevertheless, it is only in the last few years that we have been able to directly use the largest power plant available to us – the sun. To achieve this, we use photovoltaic (PV) systems. They convert solar radiation into electrical energy.

Working principle of a solar cell

A photovoltaic system is a facility that produces electricity from sunlight. This facility consists of various components, the heart of which are the solar cells. They are responsible for converting light into electrical energy. But how does such a solar cell work? Few people know that Albert Einstein received his Nobel Prize in 1921 not for his famous theory of relativity, but for the discovery of the photoelectric effect. It is precisely this effect that makes the conversion of light into electricity possible in the first place. The photoelectric effect states that light particles with sufficient energy can knock electrons out of a material. This is exactly what PV systems exploit. Solar cells consist of specially prepared semiconductors that are exposed to sunlight. 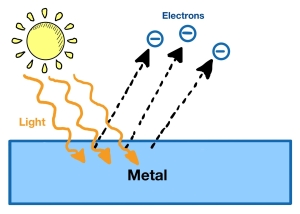 Semiconductors have the property that their electrons only loosely bind to the material. Thus, the energy of sunlight alone is sufficient to produce free electrons in the semiconductor. These free electrons now ensure that an electric current flows and an electric voltage generates. A typical solar cell has an open circuit voltage of about 0,6 V. In practice, several solar cells are connected in series, which increases the electrical voltage. One calls this a solar module, which can provide typical voltages of 38 V and powers of 240 W.

A typical photovoltaic system in private installations has an efficiency of up to 25 %. This means that the solar cell can convert 25 % of the incident solar radiation into electrical energy. At first glance, there is still a lot of room for improvement. In fact, it is possible to achieve significantly higher efficiencies, but only if you pay a (usually significant) surcharge. The reason for this are the semiconductors which are the basic building blocks. Solar cells in the private sector are usually made from silicon. Since silicon is the second most abundant material in the earth’s crust, such silicon PV systems are inexpensive. In space applications, where price plays only a minor role, multi-layer solar cells are in use. These consist of several layers with different semiconductors and can achieve efficiencies of 30-40 %. The orientation and inclination of a PV system also affect its energy production. An inclination of around 30° is optimal and an orientation of the plant towards the equator can significantly increase the energy yield. In practice, there are now also photovoltaic systems in use that follow the sun path with the help of a motor. Performing measurements on PV systems – The best way is with DEWTETRON

The top priority when operating a PV system is to maximize efficiency. Assuming an ordinary photovoltaic with 25 % efficiency and an annual production of 5000 kWh of energy, a reduction in efficiency of only 5 % leads to a loss of 1000 kWh. Converted, this is about 220€ per year based on an energy price of 0,22 €/kWh. So you can see that even small reductions in efficiency can cause high costs. To avoid this, a routine check of the performance data is necessary, especially for larger power plants. At DEWETRON, we specialize in exactly such measurements. Our in-house developed and produced power analyzers can be customized to your specific needs. Once you have measured the data, our OXYGEN software makes it easy for you to determine reactive power, efficiency and much more.  Have we caught your interest? In this case visit us on our Sci-Meas website. There you will find whitepapers and video tutorials in addition to our products.  For more information or to request demo contact us!